The Last Conspirators has been the songwriting, recording and performing vehicle for Tim Livingston since 2005. The All Music Guide calls Tim Livingston "…a pioneering figure on the punk scene in New York State’s Hudson Valley” and The Times Union calls him an "Albany rock legend". He was the founding member of one of Albany’s first punk bands (the Morons 1979-1982).

Hold That Thought Forever is the 4th album for the Last Conspirators. 11 new songs expressing the painful pleasure of redemption through the passionate desire of love. With this album the songwriting alliance of Tim Livingston and Nick Bisanz have crafted a lyrical and sonic soundscape that is reminiscent of the timeless rock albums of the 60s, 70s, and early 80s yet serving it all up with an undeniably modern edge.

From the pure power-pop of "Perfect Lovers in a Complicated World" and "Russian Eyes", to the sultry, soulful groove of "Addiction" through the mystical vibe of "1302 the album weaves into the urgent new-wave rush of " Fortune Teller" to the lustful spoken desire of "Tracks and the powerful ballad "Two Days In May". Despite being stripped of the politics and world affairs of previous releases, in lieu of matters of the heart, the Last Cons relinquish none of their powerful edge evident here in the stunning hard rock of "Blow Away The Sky", "The Truth and a Gun" and the swaggering "Alright".
Produced, engineered and mixed by Chris Fisher (Conehead Buddha) at Easter Island Studios, Hold That Thought Forever is the followup to the Last Conspirators three previous, critically acclaimed, releases. but launches the band into new territory both musically and lyrically. 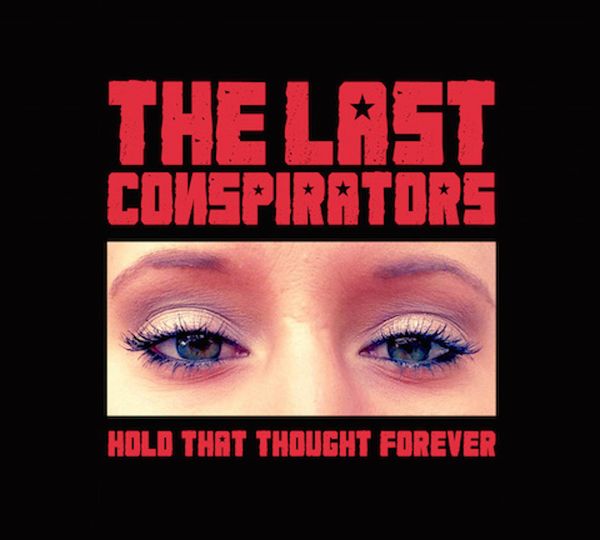 ALL MUSIC GUIDE““a powerful rock & roll band whose sound fuses old-school punk, roots rock, and heartland rock, with fierce, often politically charged lyrics on top. The Last Conspirators are fronted by singer and songwriter Tim Livingston a pioneering figure on the punk scene in New York State’s Hudson Valley... true believers, keeping the rock & roll flame burning even if it may no longer be fashionable to do so.. coming across like an Americanized version of the Clash… the Last Conspirators.. waging war against complacency and cherishing the rebels and outsiders on the fringes of American culture. .. raging against the light, whether it's dying or burning bright.."

BIG TAKEOVER MAGAZINE "If you want to know where the real songwriters in punk are this day and age, look no further.. a ’60s garage, pub rock, and Joe Strummer-fueled tempest"

The Last Conspirators third album, A CELEBRATION OF FURY  is the followup to their critically acclaimed WARPARTY and WHEN IT ALL COMES DOWN releases. Blurt Magazine claims: "Joe Strummer would make these guys his new favorite band were he still alive". The Big Takeover Magazine calls it  "an on-target attack in word and sound... a ’60s garage, pub rock, and Joe Strummer-fueled tempest".  "A high-energy sonic assault, railing against corporate radio, mindless nostalgia and the powers that be… played with the palpable passion of rebellion, adding a new-found metallic edge to their already potent brand of politico psych-punk…" says Nippertown…"A Celebration of Fury must be considered one of the best local discs of the year..". UpstateLIVE Music Guide weighs in with "... the album goes through the multiple emotional levels of rebellion and protest, with powerful lyrics that make you question authority and classic punk angst that can start mosh pits in any location. The Last Conspirators have broken their silence and have encouraged a musical political revolution, reminding the listener that they have the power for change..."

In 2010 the band released WHEN IT ALL COMES DOWN. Nippertown says; “Tim Livingston excels at writing hook-laden, politically charged paeans to pop culture, and his commando team play it rough and crunchy on the band’s powerhouse sophomore disc… the follow-up to band’s 2007 full-length debut “War Party” – gets pretty close to capturing the energy of their live shows, and if the New York Dolls played sixties psychedelic pop, this is what it would all sound like. Potent stuff.” The Big Takeover Magazine stated; “A five-song follow-up to Warparty, this equally potent recording hints these guys are not only are on to something good, they’re just getting started. Fronted by Upstate NY punk legend, Tim Livingston (whose credits go back to Killed-By-Death style Albany punks, the Morons), the band fills the same sonic space as the Clash, Adverts, Ruts, Stiff Little Fingers and New Model Army. If you want to know where the real songwriters in punk are this day and age, look no further”

WARPARTY, released in 2007, a set of old-school rock & roll protest songs, was called by the TIMES UNION “ The most potent politically charged disc of the year, walking the tightrope between punk passion and polished professionalism.” THE BIG TAKEOVER MAGAZINE said: “I hear Love, ‘60s blues rock balladry, ballsy post-punk mashers like 80s Australians, and dexterous guitars that prove ballast for Livingston’s burning convictions like “American Son” and our in-foreclosure U.S. of “Innocent”. HARP MAGAZINE called it: “incisive and poetic… overall an engaging album “, while CHRONOGRAM said: “…a quartet that brings a welcome, Information Age crunch to the tough, melodic sounds of late ’70s/early ’80s Brit-punk; think The Clash, The Jam, maybe The Ruts or the UK Subs, but with slightly glossier production values and lyrics that take shots at the soul-sucking, high-tech Noughties.” GARAGE & BEAT MAGAZINE concurs, “60s psychedelia and ’70s punk rage permeate this eclectic mix of angst rattled modern rock.”

The band’s live shows are emotional, high-energy sonic-affairs and so far they have showcased at such venues as; the Mercury Lounge in NYC, Maxwells in NJ, Club Helsinki in Hudson, the Trash Bar in Brooklyn, the Ding Dong Lunge in NYC and various New York clubs & festivals. They have shared the stage with the The Blasters, Shonen Knife, Mike Watt, New Model Army, Willie Nile, Hamell On Trial, Echoes & Shadows, and the Murder Junkies. Individually Tim has performed with Tommy Stinson (Replacements) and Richard Barone and during his days in the Morons (1979-1982) Tim played in support of the Cramps, the Motels, The Stranglers, Gary Myrick & the Figures, Classix Nouveaux and Jack Cassidy's SVT. 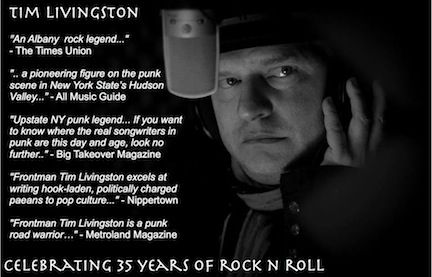 With over 40 years experience in the regional music scene the All Music Guide calls Tim Livingston "…a pioneering figure on the punk scene in New York State’s Hudson Valley” and The Times Union calls him an "Albany rock legend". He was the founding member of one of Albany’s first punk bands (the Morons 1979-1982) and he currently fronts the critically acclaimed rock band the Last Conspirators.

In 2007 with the release of his album  WARPARTY,  "Hudson Valley punk rock pioneer", front man and songwriter, Tim Livingston, hit the boards once again with his new band The Last Conspirators.  In 2010 the band released their sophomore effort  “WHEN IT ALL COMES DOWN” and their third album, A Celebration of Fury, in 2013 and the latest Hold That Thought Forever in 2016.

The Times Union named WARPARTY one of the BEST CDS OF 2007 saying; ‘The most potent politically charged disc of the year, walking the tightrope between punk passion and polished professionalism." The album release had been supported by a series of showcase live shows including; Tim’s return to LARKfest (the Capital Region’s largest festival) opening dates for roots-rockers the Blasters, UK legends New Model Army on their North American tour, ( including  sold-out shows at the Mercury Lounge in NYC & Maxwells NJ) , Japanese girl group Shonen Knife, Alt-rock legend Mike Watt, opened the first-ever Hudson Music Festival at Club Helsinki and have showcased at other various club and concert dates. In 2010 The Last Conspirators released a 5 song EP “When It All Comes Down” on the Driving Rain Music label. Metroland Magazine named it one of  the “Best Local Albums of the Year,” and the national music magazine the Big Takeover declared ”If you want to know where the real songwriters in punk are this day and age,  look no further".

In 1979, at the age of eighteen, along with JB Homicide, he started his first band, the Morons. Under the alias of TL Stone he fronted the Morons for over two years, in the process co-writing over forty songs. The Albany, NY based punk rock group wreaked havoc across the Capital Region during their day. Notorious for their rambunctious stage show and satirical social commentary, the self-proclaimed “Only Band That NEVER Mattered”, offered up “Modern Music For A Not So Intelligent World” powered by a fast punk/pop beat. In a 1981 review, the Times Union called them “a snottier version of the New York Dolls”. Metroland Magazine hailed the first single saying: “it shows an affinity to the basic drive of British punk circa 1977.. ‘Suburbanite’ is a nifty little rocker, with tongue-in-cheek lyrics that set it apart from the pack.. the band’s playing is top-notch and the arrangement, which even features a Stones style sax break at the end, is marvelous”. Years later, the same magazine remembered them as “desperate and flashy”.

Starting as a party joke, the Morons began life “Chewing on Tin Foil”, and staked their claim with such songs as: “John T Law”, “I Got Television”, “Here Come The Cats with the Jetpacks!”, “BOY” and “Ballad of a Moron”. They started playing house parties, showcase gigs, and dives throughout the area from opening slots for the Cramps, the Stranglers, the Motels, Gary Myrick & the Figures, SVT, Blotto and others, at J.B. Scotts, to one night stands at early capital region scene clubs like 288 Lark, the Chateau Lounge, Hullabaloo, Blue Angel, Towne Tavern and Bogarts.

After the Morons’ demise, away from the live scene, Livingston continued to write and record demos. Some of these were re-recorded to become 1993’s Beneath The Apocalyptic Rain, an album released on compact disc under the band name GhostRunner. Comprised of a mix of storming rockers and empty-bottle ballads, the album had Buzz Magazine declaring Livingston was “back with a vengeance”. New York Roxx Magazine hailed it as one of their “favorite releases of the year... Pink Floyd B-sides played by the legendary punk band the Sex Pistols... destined to be a cult classic..” . Despite the critical acclaim, Livingston’s days as Ghostrunner were numbered and the band played only five gigs before vanishing with the only trace being one brilliant album .

Since forming the Last Conspirators TL has remained  active by showcasing and recording the band.